You are using an outdated browser. Please upgrade your browser to improve your experience.
by Joe White
July 23, 2013
Ming-Chi Kuo, an analyst with KGI Securities, is one of the more reliable Apple commentators. However, if his latest research note is to be believed, iDevice fans have a while to wait before an iPad mini with Retina display appears on Apple Store shelves. Perhaps the most surprising aspect of Kuo's report is that he actually predicts no second-generation iPad mini at all for this fall. Instead, he envisages a less expensive model appearing around December, and a revamped iPad mini - still without a Retina display - launching in either March or April 2014. The smaller screen size of Apple's 7.9-inch iPad mini is the issue at hand, Kuo notes, when it comes to installing a Retina display within the iDevice. Besides the iPad mini, Ming-Chi Kuo sees revamped iDevices - including a low-cost "budget" iPhone, which he refers to as a "plastic iPhone 5" - launch in early September. Apple's anticipated Retina display-equipped MacBook Air, which didn't get a mention at WWDC 2013, is also in the cards and will become available in mid-September, according to the analyst. Here's Kuo's predicted product launch timeline, which was obtained by AppleInsider: Despite all the scare mongering, it'd be a surprisingly un-Apple-like move for the company not to launch an upgraded iPad mini alongside the next-generation 9.7-inch iPad. That being said, KGI Securities has a much better track record than DigiTimes, for example, with the latter being one of the few publications holding out for an actual Retina display-equipped iPad mini this fall. Instead, an upgraded iPad mini 2 sans Retina display is rather a more likely option, if a revamped, high-resolution display for Apple's small-size tablet is indeed no longer in the equation for 2013. What do you think? See also: Best Buy Launches Enhanced iPad Trade-In Program With $200 Gift Cards, Following AT&T's Claims Of Reliability, Verizon Strikes Back, and Despite Developer Center Issues, Apple Releases OS X Mavericks Developer Preview 4. 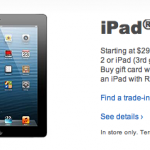 Apple's iPhone 5 Accounts For Half Of All iPhones Sold
Nothing found :(
Try something else