You are using an outdated browser. Please upgrade your browser to improve your experience.
by Bryan M. Wolfe
July 26, 2013
It looks like Apple is getting closer to launching the so-called “iPhone Lite.” Chinese site Weibo has published a photo of what appears to be Apple’s long-rumored budget handset. What makes this photo unique is that it includes markings from the Federal Communications Commission (FCC) and assorted other certifications. Adding this type of information is one of the final steps before a product is released to market. There is no way to confirm the authenticity of this photo, of course. However, the object it contains does look a lot like previous views of the less expensive handset that have leaked in recent months. The iPhone Lite is expected to feature the first polycarbonate casing for an Apple device since the iPhone 3GS, which first launched in 2009. The new model is largely expected to come in multiple colors and be priced below $300 without a subsidy. The budget iPhone is likely to launch at the same time as the so-called “iPhone 5S.” The latest rumors suggest both handsets could launch in September or October. See also: Apple's iPhone 5 Accounts For Half Of All iPhones Sold, Apple's iPhone Sales During The Holiday Quarter Could Top Record 62 Million Units, and Apple Could Be Prepping Two Different ‘iPhone mini’ Versions. Via: Phone5skopen 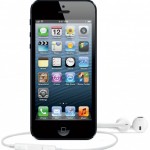