You are using an outdated browser. Please upgrade your browser to improve your experience.
by Joe White
August 25, 2013
In a recent Twitter update, Fox News anchor Clayton Morris (@ClaytonMorris) claims that "sources" have told him Apple has tested a 64-bit Apple A7 processor in its forthcoming iPhone 5S, which is said to result in the handset running around 31 percent faster than its sixth-generation predecessor. The update reads:

Sources are telling me the new iPhone's A7 chip is running at about 31% faster than A6. I’m hearing it’s very fast. — Clayton Morris (@ClaytonMorris) August 25, 2013

In an article published earlier today, 9to5Mac claims also that rumors concerning such a 64-bit A7 processor have been circulating within the industry: "We’ve independently heard claims that some of the iPhone 5S internal prototypes with fingerprint sensors include 64-bit processors. It’s unclear if 64-bit will make the cut, but it’s in been in testing," the website explains. As such, "animations, transparencies, and other iOS 7 graphical effects" will appear to run far more smoothly on the A7-equipped iPhone 5S handset. Further alterations expected to appear in the seventh-generation iPhone include a revamped camera, a fingerprint sensor, and other enhanced internals. In addition, the Cupertino, Calif. company is expected to release a low-cost iPhone 5C handset alongside its flagship smartphone. Apple is reportedly planning on unveiling both handsets at a special event on Sept. 10, 2013. We'll keep you updated with further information as we receive it. In the meantime, see: Simple Generative Music App Poly Gains Universal Support For iPhone And iPod touch, So You Think You Know Your Parts Of Speech? Find Out With Grammar Pop HD For iPad, and Today's Apps Gone Free: Articles, Retromatic, iColorama And More.

The AppAdvice Week In Review: With The Champagne On Ice, Apple Turns To TV 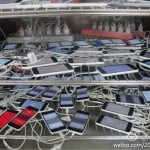