You are using an outdated browser. Please upgrade your browser to improve your experience.
by Aldrin Calimlim
August 21, 2013
The "iPhone 5S" and "iPhone 5C" are set to be released in Japan a month from now, according to a new report by Nikkei. As noted by CNET, the largest industry newspaper in Japan reports that Apple's next-generation smartphone, the so-called iPhone 5S, and its low-cost, multiple-color sibling, dubbed iPhone 5C, will be launched in the country on Sept. 20. That's 10 days after Apple's expected official announcement of the long-rumored devices on Sept. 10. SoftBank and KDDI will reportedly carry the iPhone 5S and iPhone 5C, while NTT Docomo will not. Nikkei's report also corroborates recent rumors pointing to the integration of an upgraded processor and camera plus a fingerprint sensor into the iPhone 5S. In addition, it mentions the likelihood of a gold iPhone 5S, which has been all but confirmed by previous reports. Given a Sept. 10 announcement, a Sept. 20 release is highly plausible. Add to that the fact that, historically, Apple has made every new iPhone available about a week and a half after its unveiling. A couple of years ago, Apple announced the iPhone 4S on Oct. 4 and released it on Oct. 14 in the U.S., Australia, Canada, the U.K., France, Germany, and Japan. And last year, the company introduced the iPhone 5 on Sept. 12 and made it available on Sept. 21 in the U.S., Australia, Canada, the U.K., France, Germany, Hong Kong, Singapore, and Japan. 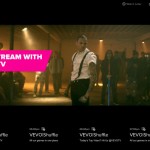 Having Signed With Apple, Vevo Could Release Apple TV App 'As Soon As This Week'