You are using an outdated browser. Please upgrade your browser to improve your experience.
by Bryan M. Wolfe
August 6, 2013
Sales of Apple’s budget iPhone are expected to overtake those of the company’s flagship phone in 2014. When this happens, Apple’s profits will fall, according to UBS analyst Steve Milunovich. According to Barron’s, the analyst believes that the so-called “iPhone M” will represent just 3 percent of total iPhone sales during fiscal year 2013. By next year, that number will hit 53 percent, representing sales of 92 million units. Apple’s fiscal year ends on Sept. 30, which is why Milunovich’s 2013 sales projections for the new model are so low. The downside to this shift from the “iPhone 5S” to the lower cost model is evident when one looks at the gross margins for each. Milunovich states:

The impact of the M depends on assumptions. We estimate the 4/4S, which the M would replace, currently have a gross margin of 55% because of the low cost of older components. We also assume the gross margin of the M will be near 32%.

Although Milunovich calls the budget iPhone the "M," most expect Apple to call it the iPhone 5C when it is released as early as next month. See also: Apple's Next Great iPhone Won't Arrive Until 2014, Foxconn Said To Be Hiring 90,000 Workers For 'iPhone 5S' Production, and The Latest Rumor On The 'iPhone Lite'. Photo: Weibo 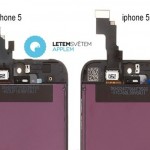