You are using an outdated browser. Please upgrade your browser to improve your experience.
by Joe White
July 28, 2013
Could Apple's anticipated low-cost smartphone be called the "iPhone 5C?" According to a recently uncovered purported image of a box full of iPhone 5C packaging, this indeed could be the case. Recent analysis has argued that Apple is planning on launching a budget handset (called, by some, the "iPhone mini"), however the exact name of the long-rumored smartphone is so far unknown. Now, an image posted in the WeiPhone forums (first discovered by Macotakara) appears to show a collection of "iPhone 5C" packaging, suggesting that the name of Apple's forthcoming low-cost smartphone has possibly been uncovered. What might the "C" stand for, you ask? Well, with the less expensive handset rumored to launch in a number of different colors, it could be that the "C" is meant to stand for "color." Of course, we'll know nothing for sure until Apple announces the handset. Hopefully, this will happen later this year, with the low-cost iPhone handset appearing alongside a revamped "iPhone 5S," an "iPad 5," and a possible "iPad mini 2." We'll keep you updated with further information as we receive it. In the meantime, see: Embark On An Epic Journey In Prince Of Persia The Shadow And The Flame For iOS, Today's Apps Gone Free: Easy Calendar, Fuel Monitor, ConsoleCam And More, and Prepare To Enter Rittenhouse's DreamRoom And Experience The Extraordinary. 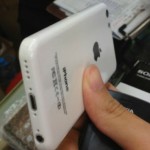 The Latest Rumor On The 'iPhone Lite'