You are using an outdated browser. Please upgrade your browser to improve your experience.
by Brent Dirks
August 12, 2013
The next-generation iPad will be sporting the same touch panel technology found in the smaller iPad mini, according to The Wall Street Journal. Using the technology will make the full-sized iPad smaller and lighter than previous versions. The report also said the tablet is currently in production:

The same touch-panel technology that made the iPad mini thin and light will likely feature in the next iPad, which is currently being produced by Apple Inc.'s Asian suppliers, according to people with knowledge of the matter. What many consumers generally call a “screen” consists of multiple layers, and the “touch panel” specifically refers to the layer equipped with touch sensors, between the liquid-crystal display and the outermost cover glass. The iPad mini, according to a teardown report by research firm IHS iSuppli, uses a film-based touch panel, which is thinner and lighter than the glass-based touch panel that the current full-size model uses. Following the iPad mini’s success, Apple plans to use the film-based touch panel in its next regular-size iPad, the people said.

Just last week, we reported on an apparent picture of the front panel and digitizer of the fifth-generation iPad. The image showed significantly smaller side bezels, just like in the iPad mini. Current speculation is that the new iPad will be introduced sometime this fall. 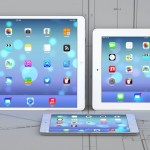 How Apple's Rumored 12.9-Inch iPad Might Look
Nothing found :(
Try something else