You are using an outdated browser. Please upgrade your browser to improve your experience.
by Joe White
September 14, 2013
Fright Fight is an upcoming iOS game that promises to bring a Super Smash Bros.-style experience to iDevices. Though the app isn't expected to launch for a couple of months, a new video shows off one of the application's ghoulish characters: Mercy the Vampire. As a reminder, here's how we introduced Fright Fight, back in our original article earlier this year:

Fright Fight allows players to engage in single-player battles (against bots) or multiplayer warfare (against friends, online). No campaign mode will be included at launch – instead, Fright Fight is all about arena-based, player versus player combat. Though free to download, in-app purchases will support Fright Fight. But worry not, because the app’s developer has noted that its in-app purchases will be limited to additional characters and boosts, both of which can be bought using “free” currency earned in-game. Speaking of characters, four are confirmed so far: Grim Reaper, Bigfoot, Vampire, and Werewolf.

Though concept art for the game's four confirmed characters had been released (pictured below), this latest video of Fright Fight's early beta footage gives iDevice users an idea of what Mercy the Vampire will offer as a playable character. Here's the video, see what you think: http://www.youtube.com/watch?v=U5KVVSUVJMc&feature=player_embedded

Fright Fight is expected to be available on limited release in October, before launching properly in November. We'll keep you updated with further information as we receive it. In the meantime, see: Carrier Wars In Japan Result In iPhone 5s Going Free On Contract, Marvin For iPad 2.0 Arrives Alongside Brand New Marvin For iPhone And iPod touch, and New Apple Job Listing Indicates That Future iDevices Could Be Solar Powered. 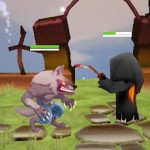 First Look: Fright Fight Could Be The Best Super Smash Bros. Alternative For iOS
Nothing found :(
Try something else