You are using an outdated browser. Please upgrade your browser to improve your experience.
by Brent Dirks
September 11, 2013
One of the bigger surprises during yesterday’s media event was the announcement of Infinity Blade III. The powerhouse iOS game franchise was thought to be dead after Dungeons was officially killed earlier this summer. But the conclusion of the trilogy will land in the App Store next week on Wednesday, Sept. 18. And if the trailer is any indication, it will be a feast for the eyes. Click here if you can’t see video. IGN also has some more information about the game:

Although Infinity Blade III tells a sophisticated linear story (Chair estimates the game contains nearly 45 minutes of cutscenes), players will have more freedom than ever in how they tackle the game’s various challenges. From The Hideout, Siris’ new base of operations, players can select from a world map which of several fortress strongholds they want to assault, compared to just a single major playable location in both IB1 and IB2. The Hideout will also be home to a variety of eccentric allies Siris and Isa recruit along the way. ClashMobs also return, now with multiple modes of play letting people compete and cooperate within the system’s unique “massively social” system.

You can also take a look at the full demo from the event here comprised of in-game footage. Click here if you can’t see the video. The game will be compatible with most newer iOS devices running iOS 6 or higher. It will set you back $6.99. A 64-bit version of the game will also be available to iPhone 5S users. I’ve finished both of the previous Infinity Blade games quite a while ago, so I’m really excited for the final chapter. It's shaping up to be a banner time for iOS gaming. If you're interested, you can download the first two chapters of the series now in the App Store. Infinity Blade is $5.99 while Infinity Blade II is $6.99. 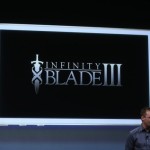 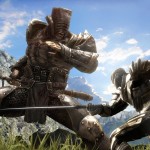 Infinity Blade III Already Underway According To Game Tester's LinkedIn Profile
Nothing found :(
Try something else