You are using an outdated browser. Please upgrade your browser to improve your experience.
by Joe White
September 1, 2013
It's been a long time coming, but 2013: Infected Wars now has a release date, and fortunately for iDevice gamers it isn't far away. In fact, according to developer Action Mobile Games, the anticipated horror app is set to launch in the App Store this Thursday, Sept. 5, 2013. As a reminder, 2013: Infected Wars situates iDevice gamers in a post-apocalyptic world, and in the game "players fill the role of a mercenary salvaging what little supplies and equipment he can for the few people left alive in a world gone mad." However, a storyline soon develops in the game, as the app's developer explains: "The player is sent deep inside the red zone to follow the trail of missing Alpha Team and this is where the immersive open environments of the game world really start to shine." In a press release published some time ago, Action Mobile Games continues:

During each mission of the game players’ tactical skills are progressively challenged requiring them to master weapons modeled after real world equivalents and defeat epic bosses.  Action Mobile Games uses Epic’s cutting-edge Unreal 3 game engine for the iOS to craft jaw-dropping visuals of real world environments and modern weapons.  Very few game development studios have the experience or knowledge to bring this level of gaming sophistication to the App Store. Creating detailed environments isn’t the only thing Action Mobile Games paid attention to.  Players will have to overcome a wide variety of infected.  From masses of infected zombies, to wolves more vicious than a rabid tiger, all the way to epic boss battles with two story giants.  Boasting unique AI and attack moves more reminiscent of the console or pc market than what you see in mobile games.  Players are in store for the most challenging shooter in the App Store.

We'll let you know once 2013: Infected Wars appears in the App Store. In the meantime, see: BoXperiments Gets Better And Goes Free In 2.0 Update, You Have Two Minutes To Win It In The Newly Updated Tetris Blitz, and Super Meat Boy Creator Team Meat Releases New Teaser Trailer For Mew-Genics. 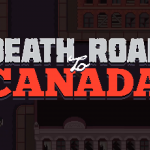 Death Road To Canada: An Upcoming Choose-Your-Own-Adventure Game For iOS