You are using an outdated browser. Please upgrade your browser to improve your experience.
by Bryan M. Wolfe
October 7, 2013
Apple is largely expected to reveal a smart wristband device in the coming months. The so-called “iWatch” could be a huge seller during the first year, according to AppleInsider. In a survey of 799 U.S. consumers, Piper Jaffray found that as many as 4 percent of iPhone owners would be early adopters of the gadget. This would translate into 10 million units sold during the first year of availability. The survey asked respondents whether they would purchase an iWatch at $350. Of those, 12 percent said they would be interested, while 88 percent said they would not. These sound like small numbers until you consider what they could mean to Apple’s bottom line. Factoring in a 30 percent gross margin, Apple would see its overall profits rise by $1.05 billion were they to sell 10 million iWatch units. If they sold 7.5 million units, Cupertino would see an increase of $790 million. As analyst Gene Munster notes:

While we do not view the watch as a likely needle-mover for Apple in terms of revenue in 2014, we put it in a similar category as the television in that it could demonstrate Apple’s ability to innovate (good for the multiple) and potentially lead to a more meaningful new product category in wearable tech.

The “iWatch” is likely to launch in 2014 and offer health and fitness tools to users. In recent months, Apple has hired two key Nike+ FuelBand developers as part of a push to “aggressively” hire folks to work on the device. Cupertino has also filed trademark applications around the world for the “iWatch” name. The smart watch market is expected to explode next year. Besides Apple, Google, Microsoft, and Foxconn are rumored to be working on their own wearable devices. Pebble and Samsung already have products available. Would you buy an iWatch from Apple? Photo: iWatch concept, CrunchWear 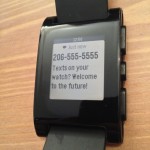 My First Month With The Pebble Smart Watch
Nothing found :(
Try something else