You are using an outdated browser. Please upgrade your browser to improve your experience.
by Joe White
October 21, 2013
Apple could be planning on launching its own keyboard cover for the iPad, and has been experimenting with prototypes for some time, according to a recent report. The cover, which would presumably look and feel a lot like Microsoft's impressive Touch Cover (arguably one of the best features sported by the otherwise unsuccessful tablet), could use Bluetooth 4.0 to connect to Apple's iPad and would be available as a "pro" addition to the 9.7-inch model only. As such, while consumers are flocking towards the iPad mini, it is hoped that such a product could persuade iDevice owners to cough up for the larger, more powerful tablet, producing a binary not dissimilar to Apple's MacBook Pro and MacBook Air laptops. The news comes from Jamie Ryan, and was brought to our attention by Gizmodo. The original report explains that Apple has been experimenting with prototypes of the unnamed accessory "for a while," however it's not known whether the product could feature in tomorrow's iPad media event. Given that Apple's invitation claims that the Cupertino, Calif. company still has "a lot to cover," it could be that new covers - be they improved Smart Covers, or the product outlined above - may be in the cards. Jamie Ryan adds that after having spoken with a number of Apple employees, additional cover-related accessories are also being considered, and could feature in Tuesday's event. Apple is expected to announce an iPad 5 and iPad mini 2 on Tuesday morning. Though the former model will feature under-the-hood improvements and a design change in keeping with the iPad mini, Apple's second-generation 7.9-inch tablet is expected to receive a high resolution Retina display. It's not known, however, whether either tablet will support Apple's fingerprint scanning Touch ID. As a reminder, Tuesday's event begins at 10 a.m. PDT. We'll be covering the day's news from start to finish, so be sure to check back with us. In the meantime, see: The WSJ Confirms: Thinner iPad 5, Retina-Equipped iPad mini 2 Are Both Incoming, It Could Be Apple Isn't Ready To Unveil New Apple TV Hardware Yet, and Apple Reveals New iOS 7-Style Icons For iLife And iWork, GarageBand To Go Freemium. 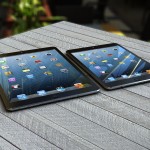