You are using an outdated browser. Please upgrade your browser to improve your experience.
by Aldrin Calimlim
November 16, 2013
It has been customary for Apple to shut down iTunes Connect for the holidays every year. And this year, as first reported by iMore, the company is set to temporarily close the developer portal from Saturday, Dec. 21, to Friday, Dec. 27. As a result, new titles or updates, including pricing changes, in the App Store, Mac App Store, and iBooks Store won't be available during that week. Normal iTunes Connect operations are, of course, scheduled to resume on Saturday, Dec. 28. Apple details the temporary closure in an email sent out to developers:

See also: Apple Is Now Allowing Developers To Transfer Apps To Others and What Users Should Know About Apple's Planned iTunes Connect Shutdown. 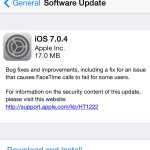 Apple Releases iOS 7.0.4 To The Public
Nothing found :(
Try something else