You are using an outdated browser. Please upgrade your browser to improve your experience.
by Joe White
November 28, 2013
The popular "smart pen," LiveScribe 3, can now be purchased in the United Kingdom, where it retails for £129.99 ("Standard") and £169.99 ("Pro"). LiveScribe 3 allows users to write on specially designed notepaper using a specially designed pen, and have their handwritten notes, doodles, and drawings beam over to a companion iOS app. In turn, this makes it possible for users to read through their notes on an iPhone, iPad, or iPod touch, to share them, and to store them digitally for future reference. Not long ago, we went hands-on with LiveScribe 3 and found the smart pen to work well. As we concluded:

If you’re looking for an iOS-compatible smart pen and are willing to pay, look no further. Livescribe 3 is an impressive, usable product and we’re pleased with what it offers. The smart pen is great, the companion application works well, and the dot paper provides a few useful features. As such, Livescribe 3 is a product we’re happy to recommend.

As such, it's good to see that LiveScribe 3 is available to order in Britain, too. This also makes it easier for users of LiveScribe 3 to purchase additional notebooks, notepads, and accessories relating to the smart pen. Numerous retailers - including Apple - are to offer the product, though unfortunately it seems LiveScribe has yet to launch an online store for Britain. There's a standard edition of LiveScribe 3 on offer for Brits, and this carries a price tag of £129.99. For big spenders, a £169.99 pro edition comes with a leather notebook and a one-year subscription for Evernote Premium. For more information, be sure to take a look at our product review. See also: It's An iPad mini, Jim, But Not As We Know It, LifeProof's nüüd Case For iPhone 5s Offers Waterproof, Touch ID-Compatible Protection, and Q: Which Popular Social Trivia Game Just Received Its First Ever Update? A: QuizUp. [gallery columns="2"] 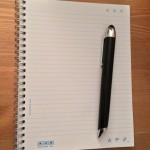 Review: iDevice-Powered Writing Has Never Been Easier Thanks To Livescribe 3 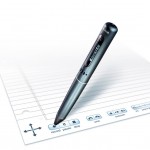 Pencast Player App Is The Missing Link Between Your Pen & Your iDevice
Nothing found :(
Try something else