You are using an outdated browser. Please upgrade your browser to improve your experience.
by Joe White
November 7, 2013
It seems that iOS 7.0.4, an anticipated minor software update for Apple's mobile operating system, is set to be released to users in the near future as use of the update has increased among Apple employees. MacRumors shares information taken from its Web logs, which indicates that an increasing number of visits to its website from Apple's servers are being placed by iOS 7.0.4-powered iDevices. In particular, throughout the last week of October this figure was seen to increase, and has spiked as of late (see the above image). Though Apple hasn't seeded betas of iOS 7.0.4 to registered developers, this is not usually the case with minor software updates. Instead, such updates often appear unannounced and correct minor problems within the mobile OS, as with the recent iOS 7.0.3. The publication also reports that though use of iOS 7.1 appears to have continued among Apple employees over the last few months, it has recently decreased. This slightly more feature-rich update to Apple's iOS had been expected to launch with its new iPads. However, since both iPads are launching at separate times, and neither appear to bring new features, it's likely that iOS 7.1 isn't going to reach users for some time - and perhaps not even until 2014. Last year, iOS 6.1 betas were made available to developers: the software update eventually launched in January, adding 4G LTE support for more carriers, along with a feature that allowed users to purchase movie tickets from Fandango after finding showtimes using Siri. Apple also included the option for iTunes Match users to download individual songs from iCloud. This had been removed in a previous software release. Though adoption of iOS 6.1 was impressive, the software update also shipped with a number of problematic bugs, leaving Apple rushing to send out a further minor software update. The Cupertino, Calif. company then released iOS 6.1.1 for the iPhone 4s, before publishing iOS 6.1.2 (which was compatible with all iOS 6.1-powered iDevices) soon after. Let's hope iOS 7.1 sees a more calamity-free launch. We'll keep you updated with further information as we receive it. See also: Apple Stores Around The World Mysteriously Closing Early Between Nov. 15-20, Apple Stores Set To Offer iPhone 5s, iPhone 5c Screen Repairs And More, and Today's Best Apps: Jinni My TV & Movie Guide, Vinyet And Charter TV. 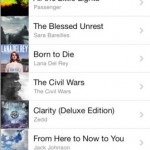