You are using an outdated browser. Please upgrade your browser to improve your experience.
by Joe White
November 6, 2013
Oceanhorn: Monster of Uncharted Seas is set to be a "premium" title that'll cost less than $15, according to its publisher. However, despite previous reports and rumors, the game isn't going to launch in the App Store on Nov. 7, as originally expected. The news comes in an interview with the German language website Appgefahren, in which the publisher of the game, FDG Entertainment, reveals more details concerning the upcoming title. In the interview, the publisher notes that Oceanhorn is set to reach the App Store "soon" - as soon as this month, in fact - but the anticipated Nov. 7 release date we'd discussed previously is false, FDG confirmed elsewhere in a forum post. Oceanhorn will be a premium title and as such, it'll be free of in-app purchases. Instead, iDevice users will have to pay a fee to download and install the game, and that will be it. FDG notes that Oceanhorn will be available for under €10, and as such the price of the application is expected to be under $15 in the U.S. App Store. The game promises adventure, monsters, and explorable islands. Though 10 hours of gameplay is in the cards, Oceanhorn gamers can also go back once they've finished the main story, and complete any side-quests that were missed when playing through the app the first time round. In our original article, we explained:

As you can see, Oceanhorn is highly reminiscent of The Legend of Zelda game series (and particularly The Wind Waker). In it, players can sail between islands and do battle against an array of villains, while solving puzzles and developing their character along the way.

Below, we've included a trailer video for Oceanhorn. Here's hoping the application sails into the App Store sooner rather than later! http://www.youtube.com/watch?v=dNpwdcXCCI8&feature=player_embedded#t=0

We'll keep you updated with further information as we receive it. In the meantime, see: Fast & Furious 6: The Game Updated With New Modes, New Muscle Car And More, Apple Holds Over 40 Percent Of US Smartphone Subscribers, But Samsung Is Gaining, and Apple Orders Termination Of Popular iPhone 5s And iPad Air Store Availability Tracker. 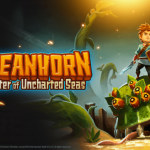