You are using an outdated browser. Please upgrade your browser to improve your experience.
by Joe White
November 26, 2013
Nokia's latest advertisement for its Lumia 2520 tablet pokes fun at the iPad Air, and challenges Apple's tablet on two fronts. First, it claims superiority because it offers support for a Nokia-made detachable keyboard; second, Nokia also touts the impressive battery life of its Lumia 2520 tablet. Because the aforementioned detachable keyboard features a built-in battery of its own, Nokia's Lumia 2520 can enjoy up to 16 hours of battery life, compared with the iPad Air's 10 hours of Wi-Fi Web surfing and media playback. As such, in Nokia's ad, an iPad user is forced to switch over to his laptop when Apple's tablet runs out of juice. Nokia also draws attention to its keyboard, which can attach to the Lumia 2520 allowing users to type on physical, rather than virtual keys. In the ad, the iPad's virtual keyboard ends up being a problem for its user, who switches over to a laptop once he begins to undertake more serious work. http://www.youtube.com/watch?v=C9PSnkVZ8So

Here's a transcript of the iPad user's narration, provided by MacRumors:

Ah, working on the move. Goodbye laptop, hello new tablet! Here we go, everyone wants one! Yes, my friends, it's thin. Thinner than a pencil! Oh yeah. Oh, it's light too, yeah. Oh, did I mention, one of these has been to space? Hang on, negative Nancy. What's with all the questions? It's got everything you need. You don't need a keyboard, you touch the screen. Argh. I wish this thing had a keyboard. I'm about as productive as a cat wearing mittens right now. Time to get the beast out I guess. Oh, this? I'm just giving it a rest. Been working it pretty hard. Oh, not the battery. Well, you don't see me getting caught with my trousers down. Not when I'm still lugging around this puppy. Ah. Oh, you again. Just act cool and nobody has to know. I do love this thing. It's still light and you never notice it in your laptop bag. Wait a minute, what's that? A Nokia Lumia 2520, you say? So, um, did I buy the wrong tablet?

Of course, it's worth remembering that a number of iPad-compatible physical keyboards are available to purchase, such as Belkin's keyboard case and cover and Logitech's FabricSkin Keyboard Folio, and offer similar functionality to the Lumia's keyboard. Though these carry price tags of their own, Nokia's own physical keyboard usually sets customers back an additional $150 on top of the tablet's $400-500 cost. As a reminder, Microsoft is set to purchase Nokia's "Devices & Services" unit, however further details of the transaction have not yet been announced. What do you think of Nokia's latest ad? See also: AppAdvice International: The Cost Of Apple's iPhone 5s, An iPhone Thief With A Heart, Injustice: Gods Among Us Gets New Playable "Super" Skins And Repeatable Challenges, and Apple Stores Account For One Quarter Of All iPhone Sales. 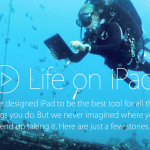