You are using an outdated browser. Please upgrade your browser to improve your experience.
by Joe White
September 3, 2013
Microsoft has announced that it is set to purchase Nokia's "Devices and Services" unit for €5.44 billion (around $7.1 billion), in an attempt to better unite its smartphone operating system, Windows Phone 8, with the hardware it powers. As such, it appears that the iPhone-competing Windows 8 platform, which hasn't seen much success since its launch, could be heading towards a new era of Apple-like software and hardware unification. The news hit the Web in a press release published by Microsoft's outgoing chief executive officer Steve Ballmer, and Nokia's present CEO Stephen Elop:

Building on the partnership with Nokia announced in February 2011 and the increasing success of Nokia’s Lumia smartphones, Microsoft aims to accelerate the growth of its share and profit in mobile devices through faster innovation, increased synergies, and unified branding and marketing. For Nokia, this transaction is expected to be significantly accretive to earnings, strengthen its financial position, and provide a solid basis for future investment in its continuing businesses. “It’s a bold step into the future – a win-win for employees, shareholders and consumers of both companies. Bringing these great teams together will accelerate Microsoft’s share and profits in phones, and strengthen the overall opportunities for both Microsoft and our partners across our entire family of devices and services,” said Steve Ballmer, Microsoft chief executive officer. “In addition to their innovation and strength in phones at all price points, Nokia brings proven capability and talent in critical areas such as hardware design and engineering, supply chain and manufacturing management, and hardware sales, marketing and distribution.”

As part of the deal, 32,000 Nokia employees - 4,700 of which are based in Finland - will be transferring to Microsoft, who now also owns Nokia's Lumia and Asha brands, along with the company's long-standing license with Qualcomm. It'll be interesting to see how Microsoft utilizes this move in its future-generation Windows 8 handsets, and if the platform can seriously establish itself as a major player in the U.S. smartphone market, along with Apple's iOS and Google's Android. We'll keep you updated with further information as we receive it. In the meantime, see: Today's Best Apps: Air Hockey Intense And 4 Thrones, It's Official: Verizon Confirms Its Purchase Of Vodafone's Stake In Verizon Wireless, and Quickly Manage And Share Lists With Silo.

The AppAdvice Week In Review: With The Champagne On Ice, Apple Turns To TV 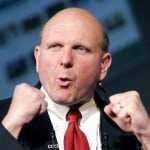 Ballmer Is Out At Microsoft
Nothing found :(
Try something else