You are using an outdated browser. Please upgrade your browser to improve your experience.
by Joe White
November 26, 2013
Collectively, Apple Retail Stores and the Apple Online Store have been shown to account for one quarter of all iPhone sales in the United States, according to a recent report from Consumer Intelligence Research Partners (CIRP). More specifically, the Cupertino, Calif. company's retail presence accounts for 11 percent of retail phone sales, CIRP explains - an impressive feat, given that Apple of course only sells iPhones. Out of all iPhone handsets sold between its retail stores and the Apple Online Store, as noted above Apple also accounts for one quarter. Carriers AT&T and Verizon pick up 21 percent and 18 percent of iPhone sales, respectively. CIRP notes that carrier stores are still a main source of smartphone sales, however. In particular, Best Buy has proven to be a point of interest: "Surprisingly, in light of its recent financial troubles, Best Buy has significant power," CIRP added. Because the retailer offers all brands of smartphone with all four of the major U.S. carriers, customers are in a position where they can more easily compare between devices and carrier plans when visiting a Best Buy store. CIRP's report reached us from AllThingsD, which explains:

Mass merchants such as Target, Walmart and Costco are also worth noting, collectively accounting for 12 percent of sales — that’s about as much as Best Buy and Apple sell individually. According to the survey, Amazon makes up seven percent of sales; eBay, two percent. Of the carriers, Verizon gets the biggest proportion of sales — 57 percent — from its own stores, while the other three major carriers each get roughly half of their sales from their own stores. Both Verizon and AT&T have been working on plans designed to make their stores even more of a destination.

This Friday, retail locations across the United States (and internationally, too) will host the one-day shopping event known as Black Friday. Apple Retail Stores will partake in the madness, and many are scheduled to open early on Friday morning in order to meet demand from customers. Further retailers and manufacturers including Belkin, H.H. Gregg, Best Buy, Walmart, and Target also have impressive Black Friday deals available, too. We'll keep you updated with further information as we receive it. In the meantime, see: Do Your Mobile Holiday Shopping With The Redesigned Target App For iPhone, Samsung Hoped To Stay Apple Patent Damages Trial, But Judge Denies, and Celebrate The Holidays With The Sims FreePlay's Festive Items And Quests. 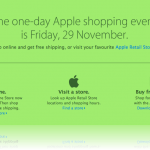 Apple Is Getting Ready To Unwrap Some Black Friday Deals 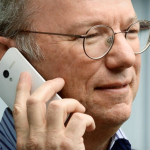 Google Chairman Eric Schmidt Publishes 'Guide' On Switching From iOS To Android
Nothing found :(
Try something else