You are using an outdated browser. Please upgrade your browser to improve your experience.
by Joe White
December 31, 2013

The end of 2013 is almost upon us, and we’re settling in for the last edition of AppAdvice International this side of the New Year. It’s been a quiet week, for sure, but worry not - we’ve still got a few news items to discuss concerning Apple’s work overseas.

This week, we’re going to be talking about an upcoming video streaming service from the BBC, a new Apple Retail Store set to open in Brisbane, Australia, and whether China’s shrinking smartphone market could affect China Mobile’s sales of the iPhone 5s and iPhone 5c.

BBC to take on iTunes, Netflix

The British Broadcasting Corporation (BBC) has a crosshair leveled over Apple’s iTunes Store and the video streaming service Netflix, and plans to challenge both in a forthcoming “BBC Store” offering paid downloads of on-demand content.

The anticipated “BBC Store” will provide users with popular titles such as “Doctor Who,” “Luther,” and “Sherlock,” offering paid downloads of older TV episodes and series. One BBC insider explained that individual episodes could be downloaded for £0.99 each, and that a six-episode series would set users back around £5. By comparison, the publication goes on to note that in the British iTunes Store “Luther” is available for £5.99, while it can also be accessed using the £5.99-per-month Netflix.

The news reached us from the Daily Mail, which explained: “Volunteers are being asked to study mocked-up pages from the BBC Store website, which display a particular show together with details of its price and how to buy it.”

Besides this, also in 2014 the BBC plans on making content available for longer using its online iPlayer service. Though TV shows can be viewed on-demand for seven days at present, the BBC aims to increase this limit to 30 days next year.

It’s good news for Brits, then, who’ve long been somewhat disillusioned at the pricing in Apple’s iTunes Store. We’re still a way off liberating ourselves from satellite and cable, but Internet television appears set to become even more of a viable alternative in 2014 - especially with the BBC’s anticipated service.

Apple’s long anticipated flagship Apple Retail Store in Brisbane, Australia is set to open in the coming days, if recent barricade signage is any indication. The signage appeared recently outside the in-construction retail store, with ifo Apple Store’s Gary Allen (@ifostore) claiming that the new Apple Retail Store should open on or around Jan. 10–11.

Apple store barricade signage usually appears 10-14 days ahead of a grand opening. So a Jan. 10th or 11th event for Brisbane seems in order.

Earlier this year, the same retail store suffered a delay in its construction process due to complications surrounding the installation of a modern retail store within an historic building. However, these problems were soon corrected, and subsequent blueprints discovered back in August indicated that construction on the retail store was continuing.

The new store forms part of Apple’s ongoing retail expansion. As a reminder, new or expanded Apple Retail Stores have recently appeared (or are set to appear) in Sandstone, Calif., Rio de Janeiro, and Istanbul. It’ll be interesting to see how Apple’s retail presence grows once its new Apple Store boss takes over next year.

Apple might have signed a deal with China Mobile, but if a recent report is to be believed, China’s supermassive smartphone market could be reaching a state of saturation.

The report reached us from USA Today, which explains that Apple, Samsung, and their competitors will have to fight hard for China’s 1.2 billion mobile subscribers, since this number – though grand – has actually reduced over the last few months. Citing data from Wedge Partners, the publication explains that in November, the combined total of activations on all of China’s wireless networks was 11 million, and continues:

Last month’s total was the lowest of the year and fell from 13.4 million in October and more than 17 million in September, according to Wedge analyst Jun Zhang.

The Dec. 23 report estimates monthly smartphone user growth will decelerate by about 27%, to a range of 12.5 million to 13 million new 3G subscribers in the fourth quarter, from a monthly range of 17 million to 18 million in the third quarter.

USA Today explains that the impending launch of Apple’s iPhone 5s and iPhone 5c with China Mobile “may have come just as that country’s smartphone market growth has begun to slow.”

It’ll be interesting to see how sales of the iPhone in China develop over the course of 2014. We’ll keep you updated on this front.

That’s all for this week’s edition of AppAdvice International. All that remains is for us to wish you all a Happy New Year - see you in 2014! 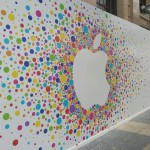 Apple's Flagship Store In Brisbane, Australia Expected To Open Soon
Nothing found :(
Try something else