Over the next few weeks, we’ll be reviewing Cambridge Audio’s Minx Go, the BRAVEN 710, and Jawbone’s Big JamBox. All of these are great speakers, but there’s one problem: none of them support Apple’s AirPlay, the iOS-compatible music streaming solution that allows users to quickly stream music from any iDevice. Fortunately, it is actually possible to AirPlay music to an unsupported Bluetooth speaker using a simple workaround, and in this article we explain how.

Bluetooth works reasonably well as a wireless streaming solution, but there are a few problems: its range is of course limited, but more problematic is the oft-awkward connection process that’s required before folks can stream music over to Bluetooth-only wireless speakers. AirPlay allows anyone to instantly stream music from an iDevice to compatible speakers over Wi-Fi; there’s no pairing process, making this solution perfect for parties, family gatherings, or anyone who simply wants to quickly switch between sharing music from multiple iDevices, like myself.

Provided your Bluetooth speaker doesn’t travel too far from your computer, you can enable AirPlay support through downloading a single desktop application. The free app, AirFoil Speakers (available for OS X, Windows, and Linux), can turn your Mac, PC, or Linux computer into an audio AirPlay receiver. All you need to do is download the application, install it, and keep it running in the background; your computer’s name should then appear after touching the AirPlay icon in Control Center, allowing you to stream music over to be played through the machine’s built-in speakers.

From here, all you need to do is connect your Bluetooth wireless speaker to your computer, rather than to your iPhone or iPad, and hey presto: the speaker will now have AirPlay support! You’ll be able to AirPlay content to the speaker by selecting your computer in AirPlay’s interface and playing music from your iDevice, as in the below image; provided you’re all paired up, the computer itself will merely act as a channel and your Bluetooth wireless speaker will rather play the AirPlay-streamed track directly. 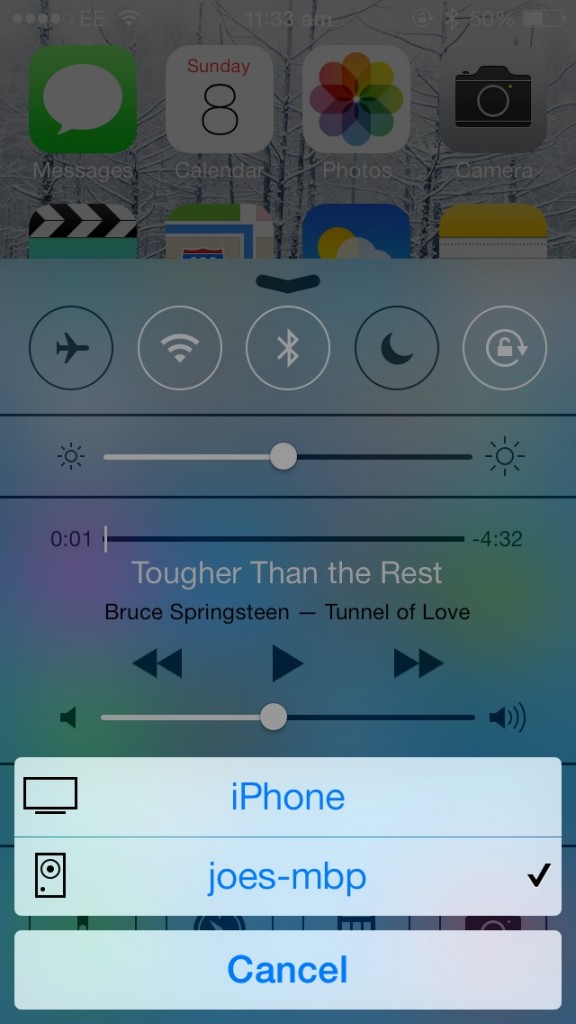 If you have a MacBook like me, it could be that you’d like to use this method but don’t want to leave your laptop’s display open throughout. There are a couple of apps that can help out here, but in order to get around this problem I’ve been using NoSleep. Once installed and enabled (using a toolbar icon), this free app keeps your MacBook running when its lid is closed, making it possible to still use the computer – and AirFoil Speakers – to AirPlay content through the MacBook to your Bluetooth speaker. Plus, NoSleep allows the computer’s screen to go to sleep, thereby preserving both your Mac’s display and its battery life. Clever, right?

Mac users aren’t advised to leave NoSleep enabled permanently, but there is no harm in using the application for the purposes of this setup; just be sure not to enclose the MacBook in a bag or a case, in order to avoid the computer overheating.

Furthermore, to ensure that you don’t accidentally leave your NoSleep-powered Mac running overnight, you can also schedule your computer to automatically go to sleep (and wake up) at specific times in OS X Mavericks’ Energy Saver settings. It seems after several tests that even with NoSleep enabled, a Mac will still go to sleep if a schedule has been set in System Preferences, which is definitely useful. 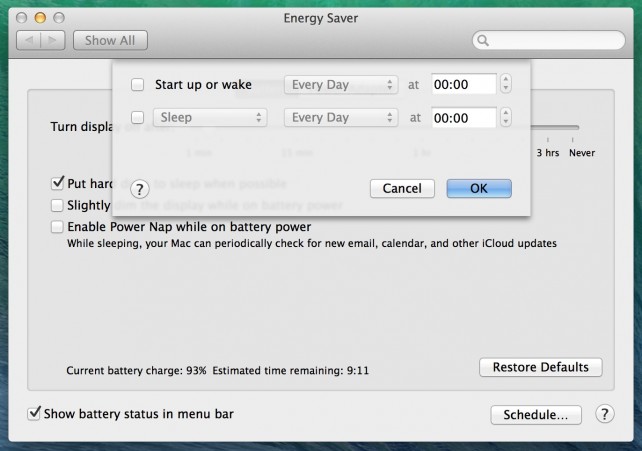 Of course, you’ll need to keep your speaker relatively near your computer, too, in order for the above workaround to be of use (the required distance will depend on your speaker). But if you’ve got a model that can travel further than most – like the BRAVEN 710 or Jawbone’s Big JamBox, both which can actually stretch quite far – this is a great method and it works surprisingly well.

As far as I can tell, this is the best means of adding AirPlay functionality to a wireless speaker that doesn’t natively support Apple’s protocol (do let me know at joe@appadvice.com if you have a better solution). Though I’ve not been able to test any using my iPad Air, there used to be a couple of jailbreak tweaks which did the same job but for an iPad, rather than a desktop computer. This article from MacStories should provide a good starting-point for anyone looking to take this route.

Check back with us, because starting tomorrow (with Cambridge Audio’s Minx Go) we’ll be reviewing a bunch of impressive wireless speakers.

In the meantime, see: Apple Joins Google, Microsoft And More To Appeal For A Reform To NSA Surveillance, Argus Fitness-Tracking App Updated With New Social Feature, Fitbit Import And More, and Epoch 2’s First Major Update Has You Covered With 64-Bit Support Plus More. 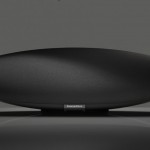 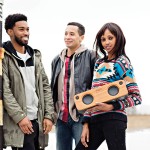 Review: House of Marley Get Together
Nothing found :(
Try something else