Qualcomm's chief marketing officer (CMO) might have originally publicly dismissed Apple's 64-bit A7 processor as being little more than a “marketing gimmick,” but according to a different employee the powerful “desktop-class” smartphone chip actually shook Qualcomm back when it was unveiled and prompted a degree of panic within the company.

Apple's A7 processor is the first 64-bit smartphone processor to have launched, and combined with other areas of the iPhone and iPad's internals, the A7 makes it possible for our iDevices to run complex, beautiful graphics, to undertake tasks at faster speeds, to monitor one's location in conjunction with the M7 coprocessor, and to provide an all-round better mobile computing experience for users.

However, in early October Qualcomm's CMO Anand Chandrasekher didn't agree with Apple's claims concerning the benefits of a 64-bit mobile processor. He called the A7 a “marketing gimmick,” and added that he believes “there's zero benefit a consumer gains from that.” Qualcomm soon after rejected Chandrasekher's claims, and to nobody's surprise, the company subsequently confirmed its intention to produce a 64-bit mobile processor of its own.

In a new report from HubSpot (which reached us from MacRumors), one Qualcomm insider is quoted as admitting that Apple's A7 chip actually “hit us in the gut” when it was announced in September.

HubSpot notes that the Qualcomm employee continued: “Not just us, but everyone, really. We were slack-jawed, and stunned, and unprepared. It’s not that big a performance difference right now, since most current software won’t benefit. But in Spinal Tap terms it’s like, 32 more, and now everyone wants it.”

The article questions how exactly competitors missed out on recognizing the significance of 64-bit mobile processing until Apple unveiled its A7 chip, and the Qualcomm insider continues:

The roadmap for 64-bit was nowhere close to Apple’s, since no one thought it was that essential. The evolution was going to be steady. Sure, it’s neat, it’s the future, but it’s not really essential for conditions now.

Besides Qualcomm, Samsung is also planning on bringing a 64-bit processor to its mobile devices at some point in 2014. However, Apple has indeed beaten its rivals to the finish line in this respect; next year, we're expecting to see the second-generation of the Cupertino, Calif. company's 64-bit chip reach iDevices, bringing with it a handful of further improvements. 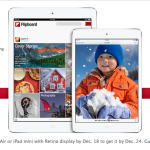 Apple's Christmas Order Deadlines Are Fast Approaching
Nothing found :(
Try something else