The “pop-up game” Tengami has been delayed until 2014, according to developer Nyamyam. But it’s not all bad news, because another trailer for the iOS app has surfaced online and we’re also hearing that Tengami is set for a January release.

Don’t hold your breath for this release date, however, because a mere few months ago Nyamyam assured iDevice users that while Tengami wouldn’t make its expected summer release window, it was nevertheless “definitely coming out this year.” Given that iTunes Connect has closed its virtual doors for the holidays today, Dec. 21, it’s no surprise to hear that Tengami isn’t set to reach the App Store in 2013, after all.

TouchArcade explains that Tengami is indeed scheduled for a January 2014 release, according to the developer. The publication notes: “To ease the pain of the numerous delays, they’ve released another trailer, this time focusing on exactly how a digital pop-up book is played using the touchscreen.”

Of course, it’s more important for developer Nyamyam to get Tengami right upon its initial release, rather than for the developer to rush the game over to the App Store. There’s nothing more frustrating than looking forward to an iOS app release only for the game to suffer a crashing bug, or to affect general use in some other way.

Tengami promises users an immersive “pop-up” world to explore; from what we can tell, its impressive graphics and unique gameplay make the application a game that\s certainly worth waiting for.

We’ll let you know once it reaches the App Store. 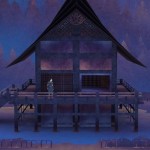 Pop-Up Tengami Reportedly Delayed, But 'Definitely Coming Out This Year'
Nothing found :(
Try something else