Pebble is the best smart watch product out there (at least for now, that is), but the iOS-compatible wristwatch isn’t without its share of quirks. One sees notifications reach the smart watch even when its owner’s iPhone is unlocked, which is pointless. Fortunately, a new jailbreak tweak called Pebble Profiles can fix this annoying problem.

Pebble Profiles is a simple but effective package. Once installed and enabled, Pebble owners will quite simply find that iOS notifications no longer reach their wristwatch when the Bluetooth-connected iPhone is unlocked. You can enable or disable the jailbreak tweak over in a dedicated preferences pane, and despite its name, no further options are available in Pebble Profiles.

In fact, even though it’s early days for the package, this is perhaps the jailbreak tweak’s biggest downside. This is certainly no criticism - after all, Pebble Profiles is available free of charge, it promises to fix one quirk in Pebble’s behavior, and it does the job well. But it’d be great to see a more fully featured Pebble manager reach our iDevices - one that allows for automated profile selection based on time and location, perhaps.

Recently, the folks behind Pebble announced a new $249 premium smart watch product - Pebble Steel - that features the same e-paper display, seven-day battery life, and waterproof design of the original Pebble smart watch. Pebble has also confirmed that a centralized watchapp store is set to reach the Pebble iOS app this year, too.

Pebble is definitely growing and improving as a smart watch platform, but could Apple’s iWatch squash the e-paper product once it launches later this year? For a better idea of how Pebble can integrate itself within your life, see: My First Month With The Pebble Smart Watch. We have a review of the competing Cookoo smart watch incoming in the near future, too.

If you’re looking to further improve your Pebble, then download Pebble Profiles in the Cydia Store now.

As mentioned, it’s a great jailbreak tweak that does one single job, but does it well. Here’s hoping we see Pebble Profiles further improve in the near future, too. We’ll keep you updated with further information as we receive it. 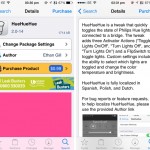 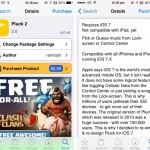 Cydia Tweak: Pluck 2 Brings Music Selection To The iOS Lock Screen
Nothing found :(
Try something else