You are using an outdated browser. Please upgrade your browser to improve your experience.
by Brent Dirks
January 22, 2014
I’ve got some bad news if you’re not a big fan of Facebook’s annoying mobile ads. The social media giant announced today that it is running a “small test” to show Facebook ads in third-party mobile apps. Doesn’t that sound exciting? Who doesn’t love Facebook’s ads already? But seriously, the company’s Sriram Krishnan explains some reasoning behind the move:

Monetization is a difficult problem for mobile app developers, particularly as people move toward downloading more free apps and advertising dollars lag behind time spent on mobile. We faced some unique challenges when we first integrated ads into the Facebook mobile experience, and we believe we’re now well positioned to help other mobile apps.

Facebook has previously run small tests like this before, but usually with an outside ad-serving platform. In the current test, the company will work directly with a “small number” of advertisers and publishers. While Facebook isn't accepting any more developers into the program for now, anyone interested can signup for future updates. At least for me, the ads on Facebook’s iOS app continue to get worse and worse. But the company continues to push forward, even recently updating the app to allow for automatically playing video ads. For other news today, see: T-Mobile Begins Offering Payment Cards, On '1984' Anniversary, Apple Debuts Shortened Versions Of 'Your Verse' iPad Air TV Ad, and How High Did iPad Sales Go During The Holiday Quarter? 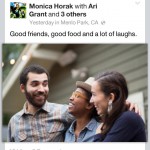 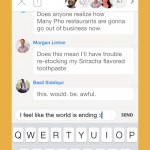