Following a successful Kickstarter campaign, Push - the secret compartment case for the iPhone 5s, iPhone 5c, and iPhone 5 - is now available to preorder online for $39.00. You can pick up a Push case in a number of different colors, and using the product it's possible to store cards, paper cash, and small documents in its ultra-discreet side compartment.

The Push case picked up over $60,000 on Kickstarter, smashing its funding goal by more than four times. March 2013 is the delivery estimate for Push cases ordered through the Kickstarter campaign, however those of you who missed out on the project now have the option of preordering a Push case online, as mentioned.

In the case, users can hide a total of either three credit cards, or two cards plus some paper cash. As you can see in the above image, the compartment is super-thin and can be actviated by pressing a discreet button on the product itself. Color options include red, black, yellow, blue, pink, and white, among others, and as mentioned, Push is available for the iPhone 5s, iPhone 5c, and iPhone 5.

The folks behind the Push case explain:

Push doesn't use elastic bands, pull-tabs, or bulky hinges. Other smartphone-wallets loudly display your cash & cards on the back of your phone-where over time they can even fall out. Shake it as hard as you can or drop it, Push can handle it. Push's front-facing wallet offers unrivaled security because your cards cannot fall out given any situation. This gives you the confidence that your essentials are completely concealed, safe, and secure no matter where you go and for your eyes only.

Though a lot of iPhone cases promise to house credit cards and cash, this is one of the first to actually feature a secret compartment, and we think it looks very cool indeed.

For more information on the Push case, including the option of preordering the product for $39.00, head over to its dedicated website. 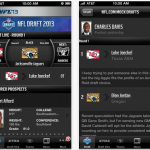 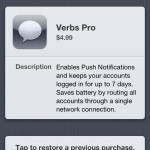 Verbs Gets An Update, Adds Push Notifications (As An In-App Purchase)
Nothing found :(
Try something else