One other new feature that’s appeared in iOS 7.1 beta 3 - and something that certain iDevice users should find particularly useful - is the ability to delete iOS installation files which have been automatically downloaded over-the-air (OTA).

You see, up until now if iDevice users chose not to install an update to Apple’s mobile OS on their iPhone or iPad, in certain cases the smartphone or tablet would nevertheless download the install file and store it locally. The only way to have the install file removed would be to update one’s firmware, and in the case of iOS 7 this meant either risking a big change to your iDevice, or losing 3.1 GB of internal storage.

Plus, if your iPhone or iPad was the 16 GB model, the lost 3.1 GB was even more of a crucial problem.

However, as of iOS 7.1 beta 3 it appears Apple has corrected this. As Macerkopf explains, in iOS 7.1 users now have the option of deleting iOS install files (as pictured above). This can be done in the “General” section of the built-in Settings application.

Of course, there’s no way of knowing whether this feature will reach the final release of Apple’s iOS 7.1, or if it’s designed to work with prerelease beta install files only. It’s not uncommon for Apple to add and then remove features in its iOS beta releases, and one recent example of this is the dark keyboard option which appeared in iOS 7.1 beta 1, but which subsequently disappeared with iOS 7.1 beta 2.

Here’s hoping the ability to delete iOS install files is one feature that’s here to stay. We’ll keep you updated with further information as we receive it.

In the meantime, for a look at the key differences between iOS 7 and iOS 7.1, be sure to check out our dedicated article.

See also: SXSW 2014 Is A Go With The New Version Of The Annual Festival Set’s Official iOS App, Simbol Is A Simple App For Quickly Finding And Copying Special Symbols On iOS, and Facebook Acquires Startup Behind Conversation Platforms Branch And Potluck. 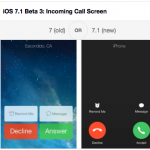 A Look At The Key Differences Between Apple's iOS 7 And iOS 7.1 Beta 3 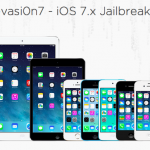 Apple's iOS 7.1 Beta 3 Broke Evasi0n7, But This Unofficial Update Provides A Fix
Nothing found :(
Try something else