Patent holding firm VirnetX Holding Corporation, the company that won almost $370 million in a FaceTime-related patent infringement suit against Apple back in 2012, has announced that it is challenging the Cupertino, Calif. company over its most recent line of products - including the iPhone 5s, iPad Air, and even its iOS 7 mobile operating system.

As a reminder, VirnetX's appeal against Apple's FaceTime service centered around four separate patents, each of which were infringed by FaceTime for OS X (on both desktop and notebook computers) and FaceTime for iOS (on smartphones and tablets). Towards the end of 2012, a U.S. court determined that Apple had to compensate VirnetX some $368.2 million, yet it seems the patent holding firm isn't stopping there.

Instead, VirnetX has announced in a press release that it's ready for a second round of legal warfare with Apple. The target this time? Apple's new iDevices, as well as iOS 7. The press release explains:

The motion alleges that newly released Apple products, including products containing the redesigned VPN On Demand and Per App VPN features implemented in Apple’s iOS 7, continue to infringe on VirnetX’s patented invention.

For clarification, VirnetX first targeted the iPhone 4s before adding the iPhone 5 to its legal onslaught in 2012 (in a separate lawsuit). From here, the iPhone 5s has most recently been incorporated within VirnetX's efforts against Apple in the above instance.

Apple did update its iOS last year, altering the software's built-in VPN feature, following its clash with VirnetX. But according to Kendall Larsen, chief executive officer of the holding firm, Apple's range of iOS-related products are still firmly at the center of his company's crosshair.

He said: “We contend that Apple continues to use our inventions in the majority of its products. We are confident that we will prevail in proving that Apple products, including the new products added to the suit, infringe on our inventions.”

It'll be interesting to see how this one plays out, but if VirnetX's past success is anything to go by, it doesn't look good for Apple.

In the meantime, see: Add An iOS 7-Style Lock Screen To Your Mac Using This OS X Screensaver, Episode 2 Of Telltale Games' The Wolf Among Us Will Be Among Us In Early February, and Take Part In The Umoove Experience And Control iOS Games Via 3-D Face Tracking. 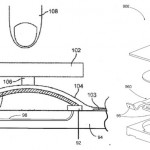 It Looks Like Liquidmetal Could Improve Our iDevices' Buttons, Touch Sensors