Did you accidentally update your jailbroken iDevice to iOS 7.0.5? Though evasi0n7 isn’t yet optimized for this latest release, the minor update can indeed be jailbroken, according to several reports. But from what we understand, as of this writing at least the process isn’t exactly sanctioned, and users are instead advised to avoid iOS 7.0.5 for now.

The good news is that if you updated to iOS 7.0.5, all is not lost. In a couple of recent Twitter updates from jailbreak developer and hacker Stefan Esser (@i0n1c), the process of jailbreaking under iOS 7.0.5 is explained. He notes:

Esser then added in another update: “sorry I cannot upload the changed evasi0n binary for iOS 7.0.5 because that would be a copyright violation,” meaning users looking to jailbreak their iDevice under iOS 7.0.5 must either reconfigure the process themselves, or take a chance on one of the modified iterations of evasi0n7 which are circulating online. The best plan for now, however, is for jailbreakers to hold off on updating to iOS 7.0.5 until the evad3rs have updated evasi0n7 accordingly.

As iOS hacker @MuscleNerd stresses, if your jailbroken iDevice encourages you to install iOS 7.0.5, “Just say no!”

This latest iOS release isn’t the only iteration of Apple’s mobile OS to cause problems for the evasi0n7 jailbreak tool. In fact, iOS 7.1 beta 4, which reached registered developers recently, appears to have patched the evasi0n7 jailbreak outright. Though there’s still hope that a workaround could be implemented by the evad3rs at some point in the near future, for now it looks like jailbreakers are going to have to hold off on updating to iOS 7.1.

If you’re running iOS 7.0 to iOS 7.0.4, you can of course still jailbreak using evasi0n7. Have you taken the plunge yet?

See also: Do You Mynd? Popular Calendar App Updated With iOS 7 Redesign And More, Use The Force To Blast Enemies To Smithereens In Lego Star Wars: Microfighters, and Paint The Town Red With John Woo’s Bloodstroke, Out Now In The App Store. 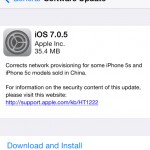 Apple Releases iOS 7.0.5 To The Public 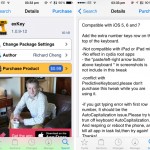 Cydia Tweak: Add A Useful Extra Row To Your iOS Keyboard With exKey
Nothing found :(
Try something else