Apple might have removed the “Now Playing” status bar indicator in iOS 7, but one new jailbreak tweak called Arco can bring it back – and goes one step further, too. Created by the folks behind Auxo, an impressive and popular package from last year, you can pick up Arco for $0.99 in the Cydia Store and all proceeds are donated to the charitable cause, Because of Ezra.

Once you’ve got Arco downloaded and installed, the package – which is available for iOS 5, iOS 6, and iOS 7 – adds a new “Now Playing” icon to the iOS status bar.

Rather than a static icon, however, Arco adds an animated circular icon to the status bar that changes its appearance depending on how far through a song you are, and whether that song is being played or has been paused.

As such, jailbreakers can get useful, at-a-glance information on the track they’re currently listening to, making it much easier to consume audio content on a jailbroken iOS device.

More important, however, is that 100 percent of the proceeds from Arco go to Because of Ezra, a charitable organization set up by Kyle Matthews (@kylematthews), founder of ModMyi. Because of Ezra raises funds to support research into Neuroblastoma (NB), the most common cancer in infancy, which sadly took the life of Kyle’s son.

We’ve talked about Because of Ezra before: Filippo Bigarella’s (@filippobiga) LivelyIcons jailbreak tweak raised funds for the same cause back in 2013, and more than $5,000 was donated by jailbreakers, we subsequently heard.

As such, Arco is not only an impressive jailbreak tweak, but it also supports a great cause. As mentioned, you can pick up the package for $0.99 in the Cydia Store, and it’s optimized for iOS 5, iOS 6, and iOS 7.

For more information on Because of Ezra, you can visit the charity’s website.

See also: Apple Is Expected To Retire The iPad 2, Cubed Rally Racer Is Set To Spawn A Snowy Sequel In The Coming Weeks, and What You Need To Know About Verizon’s New ‘More Everything’ Wireless Plans. 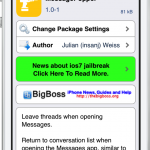 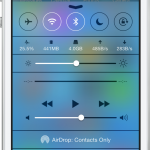