It’s been a long time coming, but biteSMS – the fully featured Messages app replacement for jailbroken iOS devices – has finally received an update adding full support and optimization for iOS 7 and ARM64 devices.

Though little in terms of additional functionality has been added in biteSMS 8.0 (don’t fix something that’s not broken, right?), jailbreakers can now rest assured that the popular application properly supports the most recent iteration of Apple’s mobile OS. Plus, while adding support for iOS 7, the folks behind biteSMS have also been able to maintain support for both iOS 5 and iOS 6, which is an impressive feat.

If you’re new to biteSMS, the free jailbreak app serves as “a complete souped-up replacement (for) the built-in Messages application,” according to its release notes. Once you have the package installed and running, features such as Quick Compose, Quick Reply, Scheduled Messages, and Auto-Forwarding make handling SMS and iMessages from an iOS device a lot easier.

You can also enable a passcode locking feature for biteSMS, contact profile pictures, advanced privacy settings, templates, signatures, delayed sending, themes, and much, much more from within the application – and all of this comes without a price tag.

In its free version, biteSMS is ad-supported, however users can pay a one-time fee of £4.95 (around $8.20) to remove all advertisements from within the application. Though biteSMS does come ad-free for seven days.

As mentioned, you can pick up biteSMS 8.0 free of charge in the Cydia Store, and the updated package is optimized for iOS 7 and ARM64 devices.

See also: IGDA Opposes King’s ‘Candy’ Trademark, Plans To Further Investigate The Filing, The Only Way Is Up For Apple’s Share Of China’s Smartphone Market, and Fishlabs Loads Up Galaxy On Fire - Alliances With New Features And Improvements. 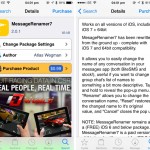