Define for iOS 7 has just hit the Cydia Store, bringing a dictionary, a thesaurus, and access to Wikipedia to the iOS Control Center. It’s a simple jailbreak tweak, for sure, but one that makes it easier than ever for jailbreakers to gain definitions, synonyms, and Wikipedia entries for search terms using an iOS device.

You can pick up Define for iOS 7 in the Cydia Store for $0.99, and once downloaded and installed, the jailbreak tweak adds a useful “Dictionary” button to Control Center (rather than Notification Center) using the CCLoader package. Tapping on this new icon activates a pop up iOS text field, and here users can input their chosen search term and the kind of search they’d like to perform.

Define for iOS 7 then presents a pop-up search result – be it a definition or a Wikipedia Web page – and this can subsequently be dismissed, allowing users to return to whatever section of Apple’s iOS they were previously at. You can access the jailbreak package from every single place you can access Control Center – and as iOS 7 users will know, this includes the Home screen, Lock screen, and even iOS applications.

In order to enable Define for iOS 7, users will need to add Define to the “Enabled” section of CCLoader’s preferences pane. CCLoader itself can be downloaded free of charge, and it’s the power house behind a number of popular Control Center-related packages.

Define for iOS 7, on the other hand, can be downloaded for just $0.99, and from where we stand it’s worth the price. Below, we’ve included a video of the new jailbreak tweak in action.

Check out the new jailbreak package now, or for more of our recent news, see: Sony Will Reportedly Provide The Front-Facing Camera Sensor For A New iPhone, Make Your Valentine’s Day Plans With Your iPhone, and Now Is The Perfect Time To Buy Phlo, The ‘Type Once, Search Anywhere’ App. 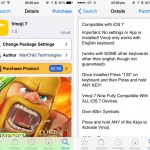 Cydia Tweak: Add More Than 800 New Symbols To The iOS Keyboard With Vmoji 7 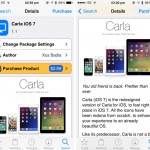 Cydia Tweak: Say Hello To Carla, A Good Looking Theme For iOS 7
Nothing found :(
Try something else