If, like me, you’re often snapping screenshots on your iOS device, one new jailbreak tweak can make the process a little more advanced. Called Snapper, the package allows users to set a defined screenshot capture area on their iOS device’s screen, and includes a couple of toggles and features which can make their screenshots appear more presentable, too.

You can pick up Snapper for $0.99 in the Cydia Store, and it’s optimized for iOS 7, iOS 6, and “probably” iOS 5, according to its developer. Once installed, a new preferences pane allows users to set up the jailbreak tweak, and here jailbreakers first have the option of assigning an Activator action to Snapper.

As such, you can invoke Snapper screenshots using a triple-tap of the Home button, for example, or a swipe from the status bar. After you’ve chosen an activation method that works for you, Snapper can be invoked from anywhere in the iOS.

After it’s been activated, Snapper places a rectangle on the iOS display, and this allows users to choose exactly how much of their iOS device’s screen is included in the screenshot.

You could drag the edge of the rectangle to take up the entire screen, of course, but for screenshots of important information (like passwords or confirmation emails), Snapper allows users to precisely define the area captured.

This is definitely a useful element; also useful are the options of adding a border or a shadow effect to captured screenshots. Both can be configured from within the Settings app using a simple toggle button.

Of course, this isn’t the first screenshot-related jailbreak tweak to have reached the Cydia Store recently. Last month, both ClipShot and ScreenshotShareSheet reached the jailbreak app store, adding an advanced screenshot management system and “Open In” support to captured screenshots, respectively.

Snapper is particularly useful, however, since it allows jailbreakers to define the area of their screen which is captured in a screenshot. As mentioned, you can pick up the new package for $0.99 in the Cydia Store, and it’s optimized for iOS 7 and ARM64 devices.

Check out the new jailbreak tweak now, or for more of our recent news, see: Cydia Tweak: biteSMS Gets Its Long Awaited Update For iOS 7, IGDA Opposes King’s ‘Candy’ Trademark, Plans To Further Investigate The Filing, and The Only Way Is Up For Apple’s Share Of China’s Smartphone Market. 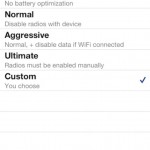 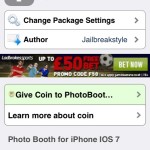 Cydia Tweak: Photo Booth For iPhone Launches Under iOS 7, But Don't Expect Much
Nothing found :(
Try something else