Certain Apple analysts often seem to err on the side of overt optimism, unrealistically predicting monstrous sales and radically new products from the Cupertino, Calif. company, year after year. One analyst, however - Rhoda Alexander with IHS - is maintaining a realistic outlook concerning an anticipated “iPad Pro.” Despite countless reports claiming such a product is incoming from Apple, Alexander notes that a closer look at the display industry indicates that a larger, 12-inch iPad actually isn’t right around the corner, after all.

You’ll remember that an iPad Pro with a screen size of 12-inches has been reported as “incoming” ever since Apple announced and released its iPad Air. Per its line of MacBook computers, an iPad Air naturally indicates that an iPad Pro is in the cards, right?

This logic might be sound, but according to Alexander, if an iPad Pro is in development Apple isn’t likely to launch the super size tablet this year. Because following an inspection of display orders made at various manufacturers, larger panels simply aren’t being ordered in volumes high enough to suggest that an iPad Pro device is set to launch later this year.

In a telephone interview with CNET, Alexander explains: “Some manufacturers over the last six months have received sample quantities of a larger panel. They’re playing around with a product that could possibly be an iPad-related product. Various sizes are being reported with 12.85 inches being one of the sizes.”

The publication continues, however:

But IHS is not factoring it into its forecast at the moment. “We have not seen volume shipments yet of any panels,” she said. “We have to get a lot further down the line in terms of seeing really strong indicators from Apple that such a product exists, and we’re just not at that point.”

Speaking more generally, Alexander went on to speculate as to whether the market would even appreciate a tablet larger than Apple’s 9.7-inch iPad Air. “When this [rumored] product was first discussed, it was said that there were requests from the education market, which I think shows a lack of understanding about how that market works. Those products have to qualify over years. Most of the education market is still using the iPad 2,” the analyst remarked.

She added: “What’s the argument for it? The usage model is not entirely clear at this point.”

As one who works primarily from a keyboard-equipped 9.7-inch iPad Air, I don’t find the display to be a problem. In fact, the immersive experience of using one app at a time is incredibly productive. What do you think? 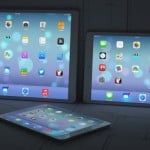