U.S. carrier AT&T has announced its “best-ever” prices for family plans, which offer subscribers unlimited minutes, unlimited text messages, and 10GB of cellular data for users to share between two or more smartphones. The news comes as AT&T continues to combat both “uncarrier” T-Mobile and Verizon’s advances in the U.S. cellular market.

You can hook a maximum of 10 smartphones up using AT&T’s revamped plans, and as you’d expect the cost increases as more devices are added. Prices begin at $130 for two smartphones, and subscribers pay $15 per additional device; three smartphones connected to the plan cost a total of $145, four will set you back $160, and so on.

Of course, the 10GB doesn’t increase as more users are added, so if there’s a data hog in the family you’d better be careful. Here’s a breakdown of the prices on offer from the carrier:

Get ready to take advantage of AT&T’s1 (NYSE:T) best-ever prices for people wanting a family-size bucket of data and unlimited talk and text on the nation’s most reliable 4G LTE network.2 As an example, a family of four can now get unlimited talk and text, and 10GB of data – enough for the whole family to share – for $160 a month.

These best-ever prices on AT&T’s best-in-class network are available beginning tomorrow to any AT&T customer, including small businesses with up to 10 lines, and customers of Verizon, Sprint, T-Mobile and other wireless carriers who switch to AT&T.

Despite AT&T’s efforts, however, it’s worth noting that the carrier’s “best ever” family plans aren’t good enough to beat T-Mobile, which offers unlimited data between smartphones from $100 per month – that’s $30 less.

As such, subscribers looking to share data between multiple devices could still end up calling at the uncarrier’s door, even with AT&T’s reduced plans available.

See also: A5(X) iDevices Can Be Jailbroken ‘For Life’ Thanks To New iBoot Exploit, Today’s Best Apps: NewsGuru And MarcoPolo Ocean, and Quirky App Of The Day: Chronicles Of Inky Challenges How You Think About Ink. 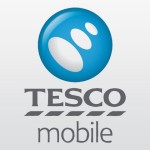 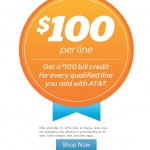 AT&T Is Offering $100 Bill Credit For Customers Who Add A New Line Of Service
Nothing found :(
Try something else