Apple is going ahead with its plan to open smaller neighbourhood stores in India's big cities and tier II markets, according to a recent report. The move would see the Cupertino, Calif. company set up venues through existing distributors and trade partners, and the new retail outlets would focus heavily on selling iPhones and iPads.

We first told you about this strategy last year, in October: at the time, we heard that establishing retail venues in smaller towns and cities could help Apple increase iPhone sales in India by around 30 percent.

Now, The Economic Times is reiterating its original report, and explains that the move will come as part of a wider push to increase Apple's share of India's smartphone market. Apple has already re-launched its iPhone 4 in the country in an attempt to encourage sales, but we're now hearing that Cupertino is indeed set to go one step further with an overhaul of its existing retail strategy.

Apple distributors Redington and Ingram Micro, along with existing trade partners, will set up the new stores; Apple has reportedly said in recent meetings that it's looking for its new retail outlets to be around 400 to 600 sq ft in size, according to three of the company's trade partners.

Apple wants to focus more on its entry-level models in these stores such as iPhone 4, iPhone 4s, iPad mini and iPad 2, which are essentially in the sub-30,000 segment and also its largest-selling products in India.

The company feels these products are also attractively priced over competitors such as Samsung and Sony, and hence, being closer to the consumer will help to increase the conversion rate.

Samsung presently holds on to around 32 percent of India's smartphone market (compared with Apple's two percent share), and the company's 1,000 “Samsung Cafes” provide consumers with easy access to a range of Samsung-made mobile devices across countless regions.

The Economic Times continues to note that Apple is targeting India's Pune, Vizag, Guwahati, Durgapur, and Gangtok regions – areas where there is a large student population, and where residents are said to have “high disposable incomes.”

Though from what we're hearing, careful planning on Apple's part could mean that the plans “unfold slowly.” We'll keep you updated with further information as we receive it. 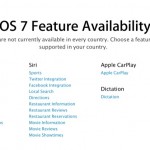 Check Which iOS 7.1 Features Are Available In Your Local Region Using This Chart
Nothing found :(
Try something else