TimeForAlarm 2, a recent addition to the Cydia Store, enhances the built-in iOS Clock app through making one small but useful alteration. Once installed, users will find that a countdown timer appears alongside alarms enabled in the application, making it easier for users to quickly see how long they have left until the Clock app’s alarm notification sounds off.

You can download TimeForAlarm 2 free of charge on the Cydia Store, and it’s optimized for iOS 7 and ARM64-devices. After it’s been downloaded, a new preferences pane is added to the iOS Settings app, and here users can configure the package’s various options.

First, you can enable or disable the jailbreak tweak outright. When enabled, a countdown timer indeed appears alongside alarms in the Clock app, and this is a useful addition – especially for early morning wake-up alarms. The countdown timer is displayed in a smaller font beneath the alarm time in the Clock application, and it updates in real time.

Over in the Settings app, users can also configure whether labels are displayed alongside alarm countdowns, or if seconds are included. Both can be switched on and off using simple toggle buttons, and you’ll need to quit and relaunch the Clock application in order for the changes to take effect.

After testing the jailbreak tweak out I can confirm that it works as advertised on my iPhone 5s (pictured above). However, I do have a lot of alarms saved in the Clock app, and with seconds enabled the overall experience was quite sluggish for me. If you find this is the case, try disabling seconds in the Settings app and see if this helps.

Given that TimeForAlarm 2 is available free of charge, it’s definitely worth downloading and taking for a spin. The package adds a feature that we’d like to see launch officially on Apple’s iOS, but until then, TimeForAlarm 2 does a good enough job. 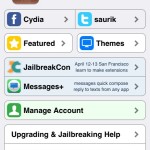 Apple's iOS 7.1 Gets Jailbroken On The iPhone 4s, But Claims Of A Public Release Are False 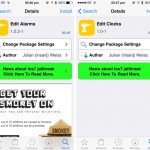 These Jailbreak Tweaks Bring 'Swipe-To-Delete' To The Built-In Clock App
Nothing found :(
Try something else