You are using an outdated browser. Please upgrade your browser to improve your experience.
by Bryan M. Wolfe
April 7, 2014
If you want the chance to go to this year’s Worldwide Developers Conference (WWDC), you better hurry. Developers have until 10 a.m. PDT to apply for tickets to this year’s event. Announced by Apple last week, WWDC 2014 runs June 2 through June 6 at Moscone West in San Francisco, Calif. Unlike in past years, the $1,599 tickets will be issued to attendees through random selection. Developers will know their status by 5 p.m. PDT today, April 7. Developers can apply for tickets via the WWDC website. Events scheduled for this year's event include: WWDC 2014 is likely to feature a demo of iOS 8 and the successor to OS X Mavericks. We might also see the launch of new MacBooks, and Apple’s recently rumored iTunes Radio subscription service. What we probably won’t see in June are new iOS devices, including the “iPhone 6” and “iWatch.” Past practice suggests Apple won’t reveal these products until fall. See also: Why Apple’s WWDC This Year Could Be Extra Special, and What Does Apple's WWDC 2014 Logo Really Mean? 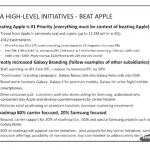