You are using an outdated browser. Please upgrade your browser to improve your experience.
by Brent Dirks
May 14, 2014
As a Cub Scout, Pinewood Derby season was always a favorite of mine. Getting the chance to construct a wooden car with my dad helped me understand how fun it is to actually build something. And a new Kickstarter project launching today, SmartWood, adds a very modern twist to that activity. Here’s a quick video about the project. Click here if you can’t see it. Basically, the three different vehicles – a crawler, dragster, and off-road truck – are app-controlled toys. But there’s much more to the system than that. Available as complete kits, SmartWood offers everything you need to assemble the vehicle of your choice, including laser-cut birchwood sheets, motors, tires, screw, and a step-by-step manual. Once your vehicle is ready to go, it can be controlled via Bluetooth with a companion iOS app. If that wasn’t fun enough, the entire system is open-sourced and based on the easy-to-use Arduino platform. Right now, for an early bird $59 pledge, you can snag a crawler. A SmartWood dragster or truck can be reserved with pledge of $79 or $99, respectively. The campaign has a funding goal of $50,000. If funded, the vehicles are slated to ship in October. The SmartWood project looks like a spectacular idea. Much like the PowerUp 3.0 paper app-controlled airplane that burned up Kickstarter late last year, the SmartWood vehicles bring a modern twist to a timeless toy. Count me in as a backer. I can’t wait to put together my crawler. For other recent news on interesting Kickstarter projects, see: The iStick Is A Flash Drive With A Built-In Lightning Plug For The iPhone, iPad, The Snakable Means Saying Goodbye To Broken Apple Lightning USB Cables, and Modulo Is The Swiss Army Knife Of Portable Battery Packs For Your iOS Device. 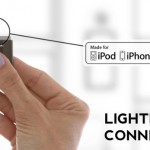 The iStick Is A Flash Drive With A Built-In Lightning Plug For The iPhone, iPad