The folks at Kid Rocket Studios have sent out an update for Kung Fu Robot, the fun animated comic book for iPad, bumping the app up to version 3.0.0 and adding new content in the form of an in-app purchase (IAP).

Volume 3 (Part One) can be accessed inside Kung Fu Robot for a $1.99 fee, and the update promises to add an avian twist on the digital comic’s plot. Over in the app’s release notes, Kid Rocket Studios explains:

If you’re not familiar with Kung Fu Robot, we’d recommend you check out this edition of Shelf Control, our weekly column dedicated to examining the relationship between Apple’s iOS, the App Store, and literature. My colleague Aldrin celebrated the app, praising its “excellent art, animations, music, and sound effects” and encouraging readers to take the application for a spin.

Besides unveiling the third volume in Kung Fu Robot, Kid Rocket also noted that it’s looking to bring Kung Fu Robot to the iPhone further down the line, and unveiled a selection of future additions to the app. In an email that recently reached our inbox, the developer explained:

Meanwhile, three more installments of “How to Make a Peanut Butter, Jelly & Kung Fu Sandwich” will conclude this initial Kung Fu Robot storyline, with updates to be released in August, October and December of this year.

For now, however, Kung Fu Robot can be downloaded on the App Store free of charge, with individual volumes retailing for varying prices in-app.

Check out the updated app, or see: Book Publishers: Amazon’s Treatment Is ‘Increasingly Ruthless’, How To Spend A $25 iTunes Gift Card For June 27, 2014, and Developer Of Monsters Ate My Birthday Cake Has Been Accused Of Plagiarism. 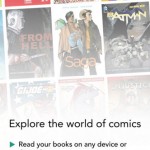 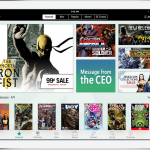 What Will Happen To The Comics App Now That Amazon Is Buying ComiXology?
Nothing found :(
Try something else