Gamers with a liking for the RPG genre will be pleased to hear that Stoic Studio’s The Banner Saga, a Viking-themed role-playing game for the Mac and PC, is set to launch for Apple’s iPad “this summer.”

The news surfaced online in a recent Twitter update from Versus Evil (@vs_evil), a consultent for indie games, which read:

We couldn't be happier to see #BannerSaga by @StoicStudio coming to tablets this summer! Expect more info very soon!

The Banner Saga started life as a Kickstarter project that smashed its funding goal in April 2012. Stoic Studio is made up of three “game industry veterans” whose previous experience includes time spent at BioWire, and the original desktop version of The Banner Saga proved to be incredibly well received.

For an idea of what the game offers players, Stoic explains:

The Banner Saga is a role-playing game merged with turn-based strategy, wrapped into an adventure mini-series about vikings.

Travel through stunning landscapes straight out of an animated film. Battle painstakingly hand-animated foes in strategic, turn-based combat harkening back to the classic “Tactics” days of gaming. Make decisions with consequences in conversations with people you’ll truly care about.

And throughout the whole thing record the history of your people on your banner where it will be remembered, because soon there might not be anything left.

The Banner Saga is a mature game aimed at gamers who appreciate art, story and strategy.

Little else concerning the iPad version of The Banner Saga is known as of this writing, however we’ll be sure to keep you updated with further information on the upcoming app as we receive it.

In the meantime, see: The Upcoming Space Colors For iOS Looks Like It’ll Be A Blast, True Skate Gets Its Anticipated Update Bringing New DLC, Goes Free For A Limited Time, and Looking Good: The Weather Channel App For iPad Goes 4.0 With iOS 7 Redesign. 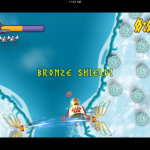 Review: Vikings Row! - This Is How I Row
Nothing found :(
Try something else