Siri is set to go into enterprise – well, sort of. Because SRI International – the non-profit research “powerhouse” famous for developing Siri, Apple’s personal assistant software – has created a similar piece of A.I. aimed at businesses.

Announced in a recent press release (via Re/code), the new service, called Kasisto, “aims to improve the consumer experience on mobile devices through intelligent conversation,” according to SRI.

Noting that Siri, also an SRI International spin-off, was the first piece of mobile A.I. software to truly popularize the idea of conversing with a virtual personal assistant, the press release explains:

BBVA, the multinational banking group, is one of Kasisto’s first customers, and the product was unveiled officially at the FinTech Innovation Lab Demo Day in New York City, which took place yesterday, June 26.

Promising a robust software development kit (SDK), SRI notes that Kasisto can be easily integrated within existing mobile apps, and that the process of adding virtual assistant capabilities to mobile software takes “days or weeks instead of months – and at a fraction of the cost of solutions currently on the market.”

It’ll definitely be interesting to see how this Siri-sibling develops over the coming months. We’ll keep you updated with further information as we receive it. 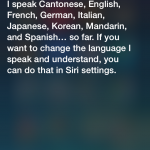 WSJ: Samsung In Talks To Buy Nuance Communications, The Company Behind Siri
Nothing found :(
Try something else