You are using an outdated browser. Please upgrade your browser to improve your experience.
by Aldrin Calimlim
July 22, 2014
Apple has responded to the surveillance claims published over the weekend by Jonathan Zdziarski, a forensic scientist and iOS security expert. According to Zdziarski, while iOS is reasonably secure from attack by a malicious hacker, Apple's mobile operating system employs backdoor security mechanisms that make an iOS device vulnerable to snooping particularly by law enforcement. Zdziarski claims that there are "some services running in iOS that shouldn’t be there, that were intentionally added by Apple as part of the firmware, and that bypass backup encryption while copying more of your personal data than ever should come off the phone for the average consumer." In response, Apple has released a statement to Tim Bradshaw, a tech reporter at the Financial Times. Unsurprisingly, Apple's statement denies Zdziarski's allegations:

We have designed iOS so that its diagnostic functions do not compromise user privacy and security, but still provides needed information to enterprise IT departments, developers and Apple for troubleshooting technical issues. A user must have unlocked their device and agreed to trust another computer before that computer is able to access this limited diagnostic data. The user must agree to share this information, and data is never transferred without their consent.

Apple also says in its statement that it "has never worked with any government agency from any country to create a backdoor in any of our products or services." This is a reiteration of an assertion it made in its response to a report publicized earlier this month by a state-run broadcaster in China, declaring Apple's location-tracking function in iOS a "national security concern." Late last December, following the exposure of the DROPOUTJEEP program run by the National Security Agency, Apple said that it had never worked with the U.S. intelligence agency to spy on iOS device users. 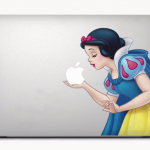 Apple celebrates 'all the many ways people love the MacBook Air' in new 'Stickers' TV ad
Nothing found :(
Try something else