First reported earlier this summer, a teardown of the iPhone 6 has confirmed that the A8 chip powering the device is fabricated by Taiwan Semiconductor Manufacturing Company, also known as TSMC.

Chipworks has been live blogging its teardown of the new iPhone, and the information was relayed by iFixit via Twitter.

Previous A-series chips for Apple devices were made exclusively by Samsung. But after a number of patent skirmishes in courts around the world, Apple was reportedly looking to lessen dependence on its rival.

The chip itself has more than 2 billion transistors, twice as many as the previous generation A7. It is also boasts 25 percent faster CPU performance and 50 percent faster graphics than the A7.

Apple says the A8, built on a 20nm process, is 50 times faster overall than the chip powering the original iPhone.

Interestingly, Samsung may not be done producing chips for Apple. The Wall Street Journal, in early August, said Apple may ask the company to help produce the A9 series chips in 2015.

Chipworks also takes a detailed look at the iPhone 6 and iPhone 6 logic boards, the new NFC controller, and other parts of the new phones. It’s definitely an interesting look to see what powers the iPhone.

If you’re interested at another look inside the iPhones, iFixit also has its own teardown take.

The week in accessories: iPhone 6 and iPhone 6 Plus case roundup, part 2 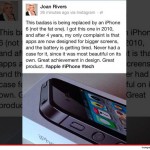 Joan Rivers returns from the grave to promote the iPhone 6 on launch day
Nothing found :(
Try something else