Earlier today, Apple started seeding the first beta of iOS 8.1 for developer testing. Now, the developer preview software has already been found to include a couple of notable additions related to Apple Pay.

As reported by MacRumors, the pair of changes have been pointed by developer Hamza Sood.

First, there’s the new screen dedicated to the key settings for Apple’s soon to be launched mobile payment system, pictured above. The settings screen for Apple Pay is apparently presented as a subsection of the section for Passbook in the iOS Settings app.

The Apple Pay settings screen includes options for adding and managing credit and debit cards and for setting the default card, phone number and billing, shipping and email addresses. It also provides a link to view the privacy policy governing Apple Pay.

The other change related to Apple Pay that has just been discovered in the first beta of iOS 8.1 comes in the form of a code string that refers to the availability of the service on iPad via Touch ID:

Pay with iPad using Touch ID. With Apple Pay, you no longer need to type card numbers and shipping information.

This suggests that Apple Pay is also coming to iPad at least through the tablet’s next generation’s long-rumored Touch ID fingerprint sensor integration with e-commerce sites and apps, if not through NFC technology.

As announced by Apple at its unveiling event earlier this month, Apple Pay works with NFC and Touch ID to enable quick and easy mobile payments at brick-and-mortar and online stores in lieu of credit and debit cards.

Apple Pay is initially compatible with the recently released iPhone 6 and iPhone 6 Plus and the upcoming Apple Watch. It’s scheduled for launch in October in the U.S. 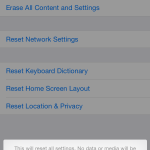 Bug found in iOS 8 causes all iWork and iCloud Drive data to get erased
Nothing found :(
Try something else