As noted by Search Engine Land, Apple Maps Connect allows small business owners or their authorized representatives to sign in with their Apple IDs to add or update their listings on Apple Maps.

The new self-service portal offers verification instantly via an automated call or later via email. Apple is said to have other anti-fraud measures in place for Apple Maps Connect, but they’re as yet undisclosed.

Provided they’re not flagged or they don’t require additional verification, new or updated listings are expected to show up in Apple Maps on iOS and on the Web within a week.

Apple is also using Apple Maps Connect to invite users to register their interest in getting iBeacon-powered indoor positioning at their venues. But due to “overwhelming response,” Apple is prioritizing venues with the following attributes:

Apple Maps Connect is just the latest in Apple’s series of initiatives aimed at making Apple Maps more accurate. It follows a report in July that revealed that Apple had been contacting business owners to resolve issues concerning incorrect information as flagged by users of Apple Maps. 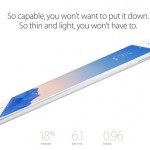 The iPad Air 2 does indeed sport 2GB of RAM along with a triple-core A8X processor
Nothing found :(
Try something else