Jony Ive was in attendance during the just-concluded New Establishment Summit in San Francisco held by Vanity Fair magazine. At a special panel called “Genius by Design,” the Apple design chief, who rarely gives interviews, talked about a variety of topics, most of which revolve around, of course, design.

In conversation with Vanity Fair editor Graydon Carter, Ive spoke most thoroughly about Steve Jobs and his relationship with the late Apple cofounder and CEO, who he said was “the most remarkably focused person I ever met in my life.”

And focus was one of the things Ive learned to value from working with Jobs, as he discussed in a portion of the conversation, which you can watch below:

Ive was also asked about his views on the alleged copying of Apple’s designs by the Chinese smartphone maker Xiaomi, a point raised by an audience member:

“I’ll stand a little bit harsh, I don’t see it as flattery,” he answered. “When you’re doing something for the first time, you don’t know it’s going to work. You spend seven or eight years working on something, and then it’s copied. I have to be honest, the first thing I can think, all those weekends that I could have at home with my family but didn’t. I think it’s theft, and it’s lazy.”

Ive also commented on the new iPhones and, of course, the Apple Watch, which has been his pet project for the past few years.

Ive was profiled by Vogue magazine last week as “the man behind the Apple Watch.” 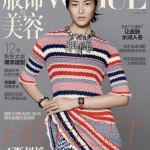