Christian Bale, the star of “The Dark Knight Trilogy” and the upcoming “Exodus: Gods and Kings,” is in talks to portray Steve Jobs.

“Oscar-winner Christian Bale, who has played Batman and Moses, is about to take on another iconic figure: Steve Jobs,” Variety reports. “Sources confirm the actor is in talks to star in ‘Jobs,’ Sony’s biopic about the late Apple co-founder.”

It’s unclear if the movie is indeed officially called “Jobs,” which is more than likely to cause confusion with last year’s similarly titled Steve Jobs biopic starring Ashton Kutcher.

In any case, the upcoming biopic is based on “Steve Jobs,” the bestselling biography written at the request of Jobs by Walter Isaacson.

Its script is penned by Aaron Sorkin, who won an Oscar in 2011 for the screenplay of “The Social Network.” According to Sorkin, the biopic is divided into three 30-minute scenes, with each scene taking place behind the scenes of a major product launch, e.g. the original Mac, the NeXT cube, and the iPod.

The film is helmed by Danny Boyle, who won an Oscar in 2009 for directing “Slumdog Millionaire.”

David Fincher, the director of “The Social Network,” was previously reported to be attached to the project, but later dropped out of it over compensation and control issues. Fincher’s top choice to portray Jobs was none other than Bale, who won an Oscar in 2011 for his supporting role in “The Fighter.”

Bale’s re-emergence as such comes a couple of weeks after Leonardo DiCaprio, the as yet Oscar-less “Titanic” and “Inception” star, was reported to have backed out of playing Jobs in the upcoming biopic. 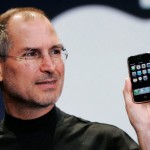 Tim Cook reflects on the third anniversary of Steve Jobs’ death in an email to Apple employees
Nothing found :(
Try something else