U2 frontman Bono has apologized to iTunes customers for the automatic and somewhat intrusive downloading of his band’s new album, “Songs of Innocence,” onto their accounts and devices.

As reported by MacRumors, the apology is made by Bono along with the rest of U2 during a recent interview organized by Facebook to celebrate the launch of the album on CD and vinyl today:

Oops. Um. I’m sorry about that. I had this beautiful idea and we got carried away with ourselves.

Artists are prone to that kind of thing. Drop of megalomania, touch of generosity, dash of self-promotion, and deep fear that these songs that we poured our life into over the last few years might not be heard.

There’s a lot of noise out there. I guess we got a little noisy ourselves to get through it.

“Songs of Innocence” was released by Apple at its iPhone 6 and Apple Watch unveiling last month free of charge to more than 500 million iTunes customers, making it “the largest album release of all time.”

Last week, Apple SVP of Internet Software and Services Eddy Cue said that more than 81 million users had “experienced” the album through iTunes, iTunes Radio, and Beats Music since its launch.

But many users were not so welcoming of the apparently invasive giveaway, prompting Apple to create a tool that would enable users to quickly and easily remove “Songs of Innocence” from their accounts.

Apple reportedly paid U2 at least $100 million to offer “Songs of Innocence” for free to iTunes customers and to have exclusive rights to its availability until today.

Amazon has actually seized upon the chance to poke fun at Apple by offering “Songs of Innocence” free to stream through its Prime Music service and tweeting with a winking emoticon, “Add it to your library—we won’t do it for you”:

Stream deluxe version of @U2's Songs of Innocence FREE in Prime Music. Add it to your library—we won't do it for you http://t.co/aLIZKoacxF 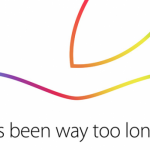 The new iPad Air and iPad mini with Retina display might hit the market on Friday, Oct. 24
Nothing found :(
Try something else