While Snapchat may have little revenue to speak of, the company is making it easier for users to send money to their friends.

The popular ephemeral messaging client has just announced a new partnership with Square for the new Snapcash feature. It’s available to users 18 and older in the United States who have a debit card.

First, you’ll need to enter your debit card information inside the Snapchat app. All information is stored securely by Square. To send money to a friend, just sign into Snapchat, type the dollar sign, an amount you want to send, and then hit the green button.

In true over-the-top Snapchat fashion, the company produced an intro video about the service. Click here if you can’t see it.

Snapchat is designed for the iPhone/iPod touch and can be downloaded now on the App Store for free. You won’t need to update the app to take advantage of the Snapcash feature.

In late October, Snapchat featured its very first ad for horror move “Ouija.” The company is planning to further integrate branded content, also known as advertising, into the service. 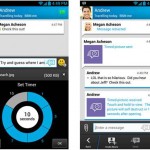